Please do not take the shot

Please do not take the shot

Forgive the sloppiness. Just dove onto this today.

According to the preliminary results of a study by a professor at the University of Almería (Spain), graphene has been found in Covid-19 “vaccines”. When examining the contents of a bottle of Pfizer / BioNTech, the researchers discovered that there is essentially no mRNA, but, rather, graphene oxide makes up 98% to 99% of its content: “This is not a vaccine, but a dose of pure graphene oxide injected into the veins.”

Referring to this study, Dr. John B. comments on his twitter - "Disturbing results of analysis by Professor Pablo Campra Madrid ... this detection of graphene oxide in the COVID-19 vaccine (Comirnaty) from Pfizer-BioNTech".

Dr. John's Twitter continues with images from Dr. Campra's report, and then ends with - “Urgent need to reproduce this analysis! Nanomaterials of the graphene family (GFN), including graphene oxide and reduced graphene oxide, are toxic."


Graphene oxide is known to cause cardiotoxicity, may function as an electrochemical biosensor using radio frequency or microwaves to detect certain chemicals in the body. Its use in drug delivery has shown to create a cytokine storm immune response, facilitates drug delivery across the BBB (Blood Brain Barrier), and may cause cellular changes such as increased neuronal firing. Interestingly, it may be used in Electromagnetogenetics as a basis for mind control.

Rastogi et al. take advantage of the fact that heating a cell membrane changes its capacitance, which elicits an action potential within the cell.  To do this, they attach fuzzy graphene wires— silicon nanowires with out-of-plane graphene flakes — to individual cells."

So in other words, Graphene is at this moment in history being use to alter neron activity. In the examople cited by this artiocle, it is done by exposing the graphene nanowires to infra red.

However this can be -- is -- also done by remote EM waves.

Remember the Deagel report? 200 million plus fewer Americans by 2025.

French economist, socialist and political advisor, Jacques Attali:
“The future will be about finding a way to reduce the population. We start with the old, because as soon as they exceed 60-65 years, people live longer than they produce and that costs society dearly. Then the weak, then the useless that do not help society because there will always be more of them, and above all, ultimately, the stupid. Euthanasia targeting these groups; Euthanasia will have to be an essential tool in our future societies, in all cases. Of course, we will not be able to execute people or build camps. We get rid of them by making them believe that it is for their own good.

Overpopulation, and mostly useless (sic), is something that is too costly economically. Socially, too, it is much better when the human machine comes to an abrupt standstill than when it gradually deteriorates. Neither will we be able to test millions upon millions of people for their intelligence, you bet that! We will have made sure that treatment is in place, treatment that will be the solution. The selection of idiots then takes care of itself: You go to the slaughter by yourself. ”
[The future of life – Jacques Attali, 1981] Interviews with Michel Salomon, Les Visages de l’avenir collection, éditions Seghers.

Colors of graphene in solution: 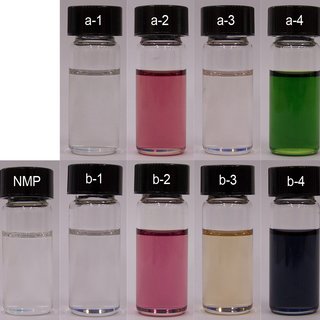 It's hard to know what to believe both from the left and the right.

I'll avoid the shot because I don't believe they are needed and are probably bad for your health. I think that's as far as I'm thinking. There is a lot of scaremongering coming out of the conspiracy crowd about the shot. It all seems scripted at this point. Been delving into this more at the below thread. My feeling now is that the fear and the rebellious push back against the shot and the NWO is all in Satans plan. He's going to come to save the world from it. He's going to lead the "light side" in its revolution.

Strangelove wrote:It's hard to know what to believe both from the left and the right.

I'll avoid the shot because I don't believe they are needed and are probably bad for your health. I think that's as far as I'm thinking. There is a lot of scaremongering coming out of the conspiracy crowd about the shot. It all seems scripted at this point. Been delving into this more at the below thread. My feeling now is that the fear and the rebellious push back against the shot and the NWO is all in Satans plan. He's going to come to save the world from it. He's going to lead the "light side" in its revolution.

Years ago I had a change of worldview. I began to believe public figures when they announced that they were thoroughgoing scumbag psychopaths.


Before that I did the common thing, tuning out nihilistic, misanthropic sentiments in order to continue enjoying whatever pleasant things might be on offer. But eventually it hit me that my conscience was bothered by the callous, heartless lyrics of Van Halen’s Jamie’s Cryin’ and Faces’ Stay With Me. The more I thought about it, the more it emerged that these songs were not funny in the slightest, nor were they harmless performance art. The composers were absolutely horrible people planting viscous weeds in the souls of the young. I realized that these songs hurt my feelings as they must anyone capable of empathy.


That was to say nothing of the overt devil worship of public personalities such as the Rolling Stones and pretty much any other pop group. Those folks were not kidding, nor were they merely painting a dark picture for dubious entertainment purposes. When Bon Scott said he was on the highway to Hell and then drank himself to death on the side of a road, it was because he actually was.


Looking objectively at live concerts, it is clear that those are just simply Satanic church services.

This change in my listening was not easy. It was difficult internalizing the truth about the Mammas and the Pappas’ John Phillips, who personally injected his own daughter with heroin and raped her on an ongoing basis. I wrestled hard with turning my ear from the blasphemous songs of Tom Waits.


Not saying the music isn’t skillfully crafted. It is. However I was either on the side of Jesus or not. I choose Jesus. Satan’s musicians are what they tell us, by word and deed, really.


By applying that same reasoning to all famous people, we can begin to see how the work of the Devil is actuated in the World.


When Bill Gates did a TED Talk and *twice* therein said his favorite method of method of population control is vaccination, he meant it. When he gleefully -- yes, gleefully -- says there will another, even worse pandemic, with terrible economic effects, he means it. He has the power to make it happen, he rehearses very publicly, then it happens.


Research what Gates’ vaccines have done is India and Africa. Bill Gates is an insane mass murderer. He dares us to believe it, yet many of us cannot. We tune out the warnings the way I used to tune out devil worship in pop music. Now, facing the obvious, my stomach is turned by Gates just as by Lady Gaga, Miley Cyrus, and whomever the current crop of Hell-bound pop singers are.


The public, non-secret fact is Anthony Fauci tried for decades to make and sell a vaccine that would be hugely profitable. He failed until covid. Now he is the highest paid federal employee, not to mention under-the-table deals with the Chinese Communist Party. He has admitted lying to the American People repeatedly. He has collaborated with scientists in Wuhan in making viruses that can spread from animals to humans. Supposedly that was to make a vaccine to stop such trans-species infections. But that makes no sense at all. Think it through: Viruses do very rarely go from animals to humanity. But to deliberately make such a virus adds a new, unusually transmittable virus. That is what Mr. Fauci did, he and his CCP partners. Has he thereby brought peace and safety or has he brought grief?


Mr. Fauci knows what he is doing. Few are as well qualified to know. Bill Gates knows what he doing. He tells us so as often as he gets on TV. Both of these men are publicly associated with other public figures who mock Christ and denounce the People God has created as being too numerous, which is a God damned lie.


On my first delve into the subject of covid vaccine-as-deliberatly-constructed-poison, I landed first on the graphene claim. After days of further investigation, I’ve come to question the graphene angle. Now it looks to me like that assertion comes from a dubious source, although it remains possible that some of the vaccines, but not all, employ graphene.


What I have no doubt of whatsoever is the ill intent of those who are promoting the supposed pandemic and the “cure” for it. Those people are depraved and the very sort referred to as “powers and principalities.” There really are actual devil worshipers in positions of great worldly power.


Why would anyone believe otherwise? Henotheist India is positively crammed with idols which the Bible tells us represent devils. In North Korea, people literally bow down and genuflect before images of their god-king. The government-in-exile of Tibet to this day uses a possessed man as an oracle. And we have video of Western public servants assembled at a devil worship ceremony at Bohemian Grove.


Is this mere scare mongering? Well, that’s not what the Bible says. The Bible says we are at war.


I care about my siblings in Christ. It hurts me to see them hurt. So, I offer the following links. That’s all I can do.

The bible says there will be great deception. A tyrannical new world order who force masks and vaccines on people is not deception. No one enjoys this.

The deception is going to be "waking up" the world to the obvious evils and getting them to rise up against it so that Satan can come in as the saviour to lead them to victory.

As a Christian I choose neither side.

Similar topics
» Fauci: Get the Shot or We'll Hurt Your Children
» 20 children and six adults shot dead at a Connecticut elementary school