i guess while i'm here, i'll beseech everyone to review this AGAIN. we can't forget this stuff.

The Nayirah testimony was the controversial testimony given before the non-governmental Congressional Human Rights Caucus on October 10, 1990 by a female who provided only her first name, Nayirah. The testimony was widely publicized, and was cited numerous times by United States senators and the American president in their rationale to back Kuwait in the Gulf War. In 1992, it was revealed that Nayirah's last name was al-Ṣabaḥ (Arabic: نيره الصباح‎) and that she was the daughter of Saud bin Nasir Al-Sabah, the Kuwaiti ambassador to the United States. Furthermore, it was revealed that her testimony was organized as part of the Citizens for a Free Kuwait public relations campaign which was run by Hill & Knowlton for the Kuwaiti government. Following this, al-Sabah's testimony has come to be regarded as a classic example of modern wartime propaganda.[1][2]

In her emotional testimony, Nayirah stated that after the Iraqi invasion of Kuwait she had witnessed Iraqi soldiers take babies out of incubators in a Kuwaiti hospital, take the incubators, and leave the babies to die....

please do read the whole thing and see who arranged it all. that's important, since they're the same bunch doing it all today.

there are videos online of the "Caucus" (a fabricated, privately funded fake commission set up by a PR agency) and her "testimony". that STORY (Iraqi soldiers took babies out of incubators) took us to war. AGAIN.

from the above story (which is still only half the truth, coming from WIKI)

Hill & Knowlton[edit]
In 1990, after being approached by a Kuwaiti expatriate in New York, Hill & Knowlton took on "Citizens for a Free Kuwait."[38] The objective of the national campaign was to raise awareness in the United States about the dangers posed by Iraqi dictator, Saddam Hussein to Kuwait.[38]

Hill & Knowlton conducted a $1 million study to determine the best way to win support for strong action.[39] H & K had the Wirthington Group conduct focus groups to determine the best strategy that would influence public opinion.[40] The study found that an emphasis on atrocities, particularly the incubator story, was the most effective.[40]

Hill & Knowlton is estimated to have been given as much as $12 million by the Kuwaitis for their public relations campaign.[41]

are ANY of those people in prison? did any of them get into any trouble for all that LYING to the world?

Tom Lantos
Chairman of the House Committee on International Relations

READ UP ON THIS GUY.

The Congressional Human Rights Foundation is a non-governmental organization that investigates human rights abuse.[42] It was headed by Democratic U.S. Representative Tom Lantos and Republican Representative John Porter and rented space in Hill & Knowlton's Washington headquarters at a $3000 reduced rate.[42]

YOU FIGURE IT OUT.
how hard is this, really?

'I'd rather see him suffer, Death is too quick.' said Mildred Valverde, 44, who left the court with the aid of crutches, still recovering three months after Tsarnaev and his older brother Tamerlan allegedly detonated two pressure cooker devices at the finishing line of the Boston marathon.

'Just to be in the same room with him was bothersome, ' added Valverde to NBC News, who said that it is her hope that if Tsarnaev is convicted he doesn't face the death penalty - but rather rots in jail.

Valverde suffered torn ligaments as well as concussion in the attack and described the entire affair on Wednesday as 'kind of eerie, kind of upsetting.'

no, she did not suffer ANY injuries during the attack.
the pictures of her pointing to her "daughter's" foot injury is PROVEN to have been taken half-way across town, long after the event.

and there is video of the kid running around AFTER the bombing, at the site, with NO injuries. 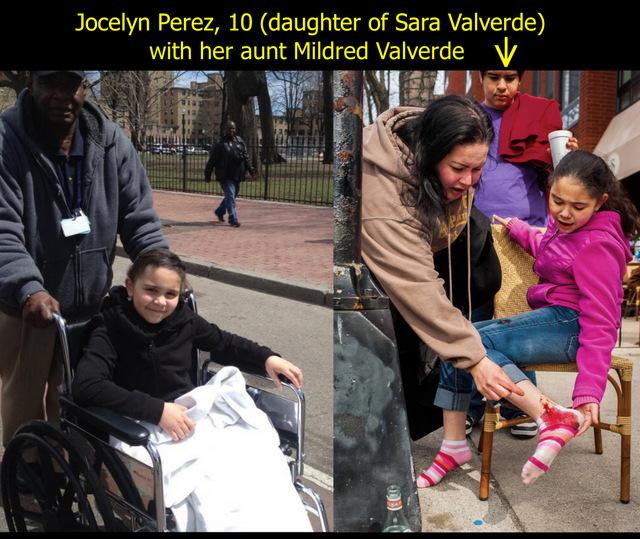 the picture on the right was taken half-way across town, as is seen in the video above.
notice the ever-present FEMA water bottle readily at hand.

EVERY SINGLE shot of someone with a bloody injury has a water bottle at hand. why? because the fake blood has to be activated with water, right at the time of the filming or photo.

a while back i spent a couple days on movie make-up; set staging; pre-production etc....it's all in there. the whole thing was a film set. one of the best evidences i saw (because i have used the technique myself) was a video showing a crew member popping "dust bags" ....(brown paper bags filled with  talcum powder or similar, products available on any FILM SUPPLIES website or).....on CUE. you can see him getting his cue, and from the background, he leans forward and smacks two bags (one in each hand) filled with powder (and air) together, making them explode, causing dust (always that stupid fake "white concrete or whatever it's supposed to be) to fly onto the spot required.

A script supervisor (also called continuity supervisor) is a member of a film crew responsible for maintaining the motion picture's internal continuity and for recording the production unit's daily progress in shooting the film's screenplay.


continuity supervisor
this is the career i had initially chosen when i branched out from graphics and design to film.

giant hollywood productions not withstanding (i wouldn't know about them), this person is responsible for, among other things, making certain the actor is standing in the right position, etc (between takes, or different days), and that their hair is combed the same way etc. stuff like that.

in small companies (troops) and productions, you do a bit of everything - one example would be this:

In stagecraft, a spike is a marking, usually made with a piece of tape (although some houses (theatres) use paint pens), put on or around the stage. This marking is used to show the correct position for set pieces, furniture, actors and other items which move during the course of a performance and are required to stop or be placed in a specific location.
http://en.wikipedia.org/wiki/Spike_(stagecraft)

keeping that in mind next time you watch any of the footage (evidence posted later):

Pro Glow Dots
Benefits
Used to spike stages for placement of scenery. Used for marking exits in dark areas. Flexible vinyl backing is conformable and easy to cut to size. Used to mark light switches. Can be printed. Can be die cut to custom sizes and shapes. Lasts for up to ten

i got my laptop back finally....now i have to delete half of the million favorites i have saved....it's the only way i'll find anything.

With a well-modeled provocation, the anticipated reaction can even become a powerful weapon in the Israeli arsenal.

For instance, a skilled game theorist could foresee that, in response to a 9/11-type mass murder, “the mark” (the U.S.) would deploy its military to avenge that attack. With phony intelligence fixed around a preset goal, a game theory algorithm could anticipate that those forces might well be redirected to invade Iraq—not to avenge 9/11 but to pursue the expansionist goals of Greater Israel…To displace facts with credible fiction requires a period of “preparing the minds” so that the mark will believe a pre-staged storyline.

have been looking into Jade Helm 15.
at first I thought it was a huge joint military exercise which would be a series of drills which go live (like 911).

it's actually waaaaaaay more complex than that.
will post on it soon if possible.

long story short, it's an A.I. (artificial intelligence) military. and it's permanent. going live doesn't begin to describe what this thing is.

remote AI vehicles that are mapping (like google earth) humanity, and IT is learning how to do full spectrum dominance quick as lightening. once the vehicles are in place (and theyre moving them in big time), its a done deal.

Page 4 of 4
Permissions in this forum:
You cannot reply to topics in this forum
Latest topics
» Beast Revelation - The New Age
by Strangelove Sat Dec 05, 2020 2:31 pm